How Many Hackers Are Targeting You Right Now? 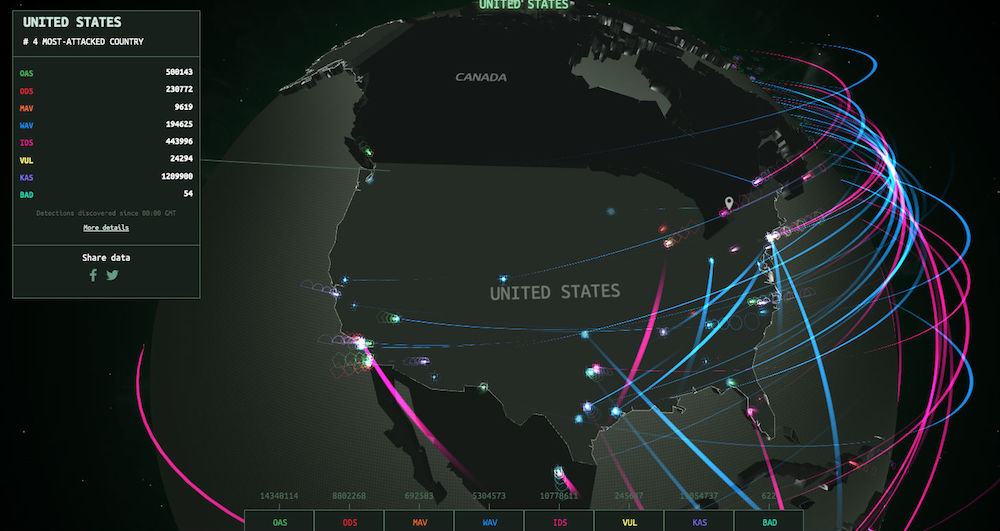 How many hackers are attacking you right now? A Cyber Attack Threat Map would show you where they come from and what they are attacking so you can guard against them. Our Threat map does that and more. Contact us for more information.

If you read about cyber security at all, you have seen articles that claim that you are being hacked today -- even right now. To demonstrate the point, companies like SonicWall and FireEye put up global cyber-attack threat maps, showing how many hacks are happening right now, where the hacks originate, and where the targets are.

“But those are OTHER companies getting hacked…Not mine,” you think. “Maybe other companies are a target, but not MY company!”.

But what if that weren’t true? Would it take a Cyber Attack Threat Map of YOUR company to show you that you are under siege right now? And if you saw such a map, and it showed how many hackers were attacking you right now, what would you do?

Two of our clients got their answers just last week. Their Cyber Attack Threat Map showed that one of their employee’s email accounts was being accessed from the Phillipines. We contacted our client, who confirmed that the employee was not on vacation. We promptly changed the password for this employee’s email, and began investigating how here data was compromised.

Another client’s Cyber Attack Threat Map showed access from Russia. Again, we contacted our client who confirmed that the employee -- who actually spoke Russian -- was not overseas. So we changed the user’s password and locked down the account. Two days later, this account was again accessed from Russia. Our investigation revealed that the client had an unauthorized Russian-language email app on his phone, which was either insecure or was purposely sharing its user data with hackers. The employee has since stopped using the app.

If only certain people’s accounts in your organization are being attacked -- as with these two stories -- there’s a good chance their data was exposed and is available on the Dark Web. But the data there could be the result of a breach 6 months ago, or longer. But when you have a Cyber Attack Threat Map system, you can know within hours that your data has been compromised.

What is a Cyber Attack Threat Map?

If you’re older than 50, you might remember a movie with Matthew Broderick called War Games. In the climax of the movie, you see a huge electronic map on a wall that shows the flight path of nuclear weapons around the world. Cyber attack threat maps look similar to that, but thankfully report on cyber attacks rather than nuclear weapons.

While this is comforting on a global scale, if your company is one being targeted by an aggressive hacker, you are still wise to be nervous, because unless you are extremely well protected, those hacks are going to become successful at some point.

That’s because many of those hack attempts are automated, which means that there is literally zero cost to trying to attack you and thousands of companies just like you. If you are unprotected, they will eventually be successful.

Why A Threat Map Should Be Part Of Your Security Plan

The main method by which your company will be hacked is through email. Hackers try desperately to gain access to your email server because once they do, they can send out fake emails to direct your staff to make financial transactions that end up in the hacker’s pocket. They can also install viruses across your network, malware, ransomware and more.

That’s why protecting your email is one of the most important parts of your cyber security plan.

Most email servers have moved to the cloud with services such as Office365 and Gsuite. While both of these systems have security tools built in, they can be expensive, weak and require frequent maintenance. So, it is difficult to know how many hackers are attacking you, or to guard against hack attempts. As a result, phishing attempts and malware can still get in.

That’s why some companies try to use an email gateway. But those devices sit outside your cloud-based email and can only see inbound emails. That means they can’t see the emails and files shared among your internal users. They also can’t detect failed login attempts typical of attempted hacks, or insider threats.

But our tools do all of that, giving you a clear picture of where your threats are coming from, whether that’s outside of your company or from inside.

We can even go beyond email, because our tools also connect to, and monitor, your cloud-based storage and sharing systems, like OneDrive, SharePoint, Box, Dropbox and Google Drive.

How Many Hackers Are Attacking You Now?

If you are like most business owners or are responsible for your company’s IT, you are concerned about these issues. You also probably don’t have any idea how many hackers are attacking you. That’s why we make it so easy to get protected. Give us a call at Digital Uppercut at 818-913-1335, or contact us online, and let’s talk about a Threat Map and next-level protection for your email, cloud storage, and your entire business.